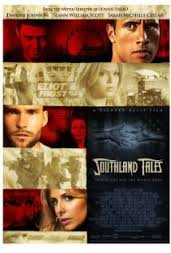 Appropriately, as today is 4 July, an old friend directed me to Abraham Riesman’s reconsideration of the absolutely wonderful Southland Tales (2006) and interview with its director Richard Kelly, “The World Ends with a Handshake: Unraveling the Apocalypse of Southland Tales.” (Thanks Robin!)

This is a film I have taught and written about (though before this blog’s time). The incomparable Steven Shaviro talks about it here and in his most recent book. And I guess there’s a pretty decent fan site for it: Fuck Yeah, Southland Tales.

I also presented on Southland Tales at my first academic conference ever, SLSA 2008. Here is an abstract for the paper I gave there (since I’ve never posted it):

Apocalyptic and messianic narratives have traditionally taken place in a stable, teleological temporal space, and for good reason.  The affective impact of their grand narratives have depended upon the necessity for certain forms of meaning to be stable in a world with a distinct beginning and ending.  Richard Kelly’s 2006 film Southland Tales, however, takes reiterating the present, and consequently the past and the future as well, as its dominant structural mode.  From Justin Timberlake’s lip-synched music video of a Killers song, to reversing T.S. Eliot’s famous line: “Not with a whimper but with a bang,” to the division of the protagonist into two distinctly instantiated embodiments, the constant reiteration of various cultural detritus in Southland Tales reveals not so much a postmodern “mash-up” of reference and self-consciousness, as it does a reiteration of Nietzsche’s metaphor of the gateway of the Moment from Thus Spoke Zarathustra.  In other words, Southland Tales offers an alternate history of the present, a view of temporality in which, in Zarathustra’s words, “Must not whatever can happen have happened, have been done, have passed by before?”  This paper will investigate how Kelly’s film reiterates Nietzsche’s critique of the scientific enlightenment through his figure of Zarathustra and the Eternal Return, while simultaneously reiterating the very eschatological messianism that so dominates apocalyptic narratives (and Nietzsche’s own critique) in a manner that emphasizes a much more fluid, synchronic view of history, and hence the unstable present as well.

I will hold off on posting the paper, as it is definitely old graduate work that should not necessarily see the light of day. But all this is making me want to return to Southland Tales, as I do not imagine exhausting the film anytime soon. (This also makes me want to get on Twitter, just so I can follow Richard Kelly.)