END_OF_DOCUMENT_TOKEN_TO_BE_REPLACED

Avery Anapol, “Lindsey Graham: War with North Korea Would Be ‘Worth It’ in the Long Run.”

Kim Stanley Robinson, “Empty Half the Earth of Its Humans. It’s the Only Way to Save the Planet.”

Ursula K. Heise, “Climate Stories” and Kate Marshall, “The Readers of the Future Have Become Shitty Literary Critics,” reviews of The Great Derangement, by Amitav Ghosh.

END_OF_DOCUMENT_TOKEN_TO_BE_REPLACED

It has been a very busy past few months, and my links have suffered. But spring break has provided some lovely, unencumbered time, so here are many, many links (futilely) attempting to catch up with what’s been happening in the world. (In the interest of space, I’ve also passed over some of the more visible recent stories.)

Sebastian Anthony, “Scientists Discover an Ocean 400 Miles Beneath Our Feet that Could Fill Our Oceans Three Times Over.”

END_OF_DOCUMENT_TOKEN_TO_BE_REPLACED

Now that the semester is starting, I will have less time to read things on the internet. So here’s one last link dump for the summer.

Maria Temming, “Geoengineering Won’t Save Us: Why It Can’t Halt the Effects of Climage Change by Itself.”

Claire L. Evans, “Climate Change Is so Dire We Need a New Kind of Science Fiction to Change It.”

Alan Taylor, “A World without People.”

Bill McKibben, “The Pope and the Planet.”

And Kenneth Chang, “World Will not End Next Month, NASA Says.”

Brandon Shimoda, ed., The Volta, no. 56, and April Naoko Heck, “Dispatch from Hiroshima.”

END_OF_DOCUMENT_TOKEN_TO_BE_REPLACED

Eric Schlosser, “Why Hiroshima Matters Now More than Ever.”

Lydia Millet, “Save the Elephant.”

END_OF_DOCUMENT_TOKEN_TO_BE_REPLACED

“Did the Anthropocene Begin with the Nuclear Age?”

Lyn Ringenberg, “A Dramatic Doomsday Warning to the World.” The Doomsday clock has been moved closer to midnight.

Jill Lepore, “The Cobweb: Can the Internet Be Archived?”

END_OF_DOCUMENT_TOKEN_TO_BE_REPLACED

As predicted, I have been quite busy indeed and have not had a chance to post anything over the past couple of weeks. A bunch of fascinating stuff has been happening, a bunch of interesting books are coming out, etc., so I’m sad that I’ve been remiss in my duties. Hopefully this large batch of links will make up for that.

George Dvorsky, “Have Humans Already Conquered the Threat of Extinction?”

One of the first reviews of Naomi Klein’s new book, This Changes Everything: Capitalism vs. the Climate.

And who knows where to put this one: Alison Flood, “Margaret Atwood’s New Work Will Remain Unseen for a Century.”

END_OF_DOCUMENT_TOKEN_TO_BE_REPLACED

Mark Strauss, “Failed Nuclear Weapons Recycling Program Could Put Us All in Danger.”

It’s sad that we even see articles like this one. Allison Kopicki, “Is Global Warming Real? Most Americans Say Yes.” Argh.

Lori Montgomery, “In Norfolk, Evidence of Climate Change Is in the Streets at High Tide.”

END_OF_DOCUMENT_TOKEN_TO_BE_REPLACED

David Hancock Turner has an interesting reflection on Margaret Atwood’s MaddAddam trilogy for Jacobin, titled “After the Flood.” He writes:

Atwood seems to intuit this and her emphasis on prefigurative forms of resistance only seems like a natural response to an overweening corporate dystopia. When the dream of revolutionary transformations seems so distant, why not at least have a taste of utopia in this world rather than toil amidst a rotten society and its artificial politics? Or does the workplace nevertheless remain the fundamental space of struggle, although now too removed or amorphous for us to recognize and rejuvenate its logic?

And what does it mean if Atwood transforms revolutionary praxis from labor activism into sabotage from the elite workers coupled with a strategy of refusal by an eclectic grouping of transients — two tactics we have recently witnessed in our own American society? The apocalypse that inhabits so much of our contemporary imagination is a signifier that the revolution and its classical preconditions are perhaps too difficult to dream.

And here’s an older review by Ursula K. Le Guin of The Year of the Flood (2009) in The Guardian.

My good friend, sculptor Taylor Baldwin, has a great write-up in Beautiful Decay, “Taylor Baldwin’s Assembled Madness.” A sample of his work, a couple of my favorite pieces.[1] [2] 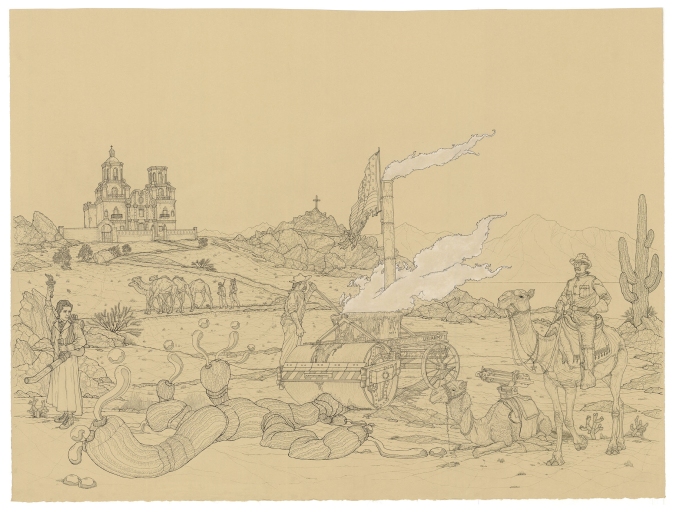 The Atlantic reports that “LOL and/or Lol! The Internet Has Style Guide Now: Sort Of.” Here’s the style guide at BuzzFeed.

Recent reports on the mega-text: “What You Learn About Tech from Watching all 456 Law and Order Episodes,” by Rebecca J. Rosen for The Atlantic.

And my friend Carolyn Kellogg reports that “Younger Book Dealers are Diving into the Antiquarian Trade” for The Los Angeles Times.

[1] Whenever I see Baldwin’s Interpreter (2010), I am always reminded of a few different lines from things. First: “I have seen the low sun stained with mystic horror, / Lit with long violet weals like actors / In some ancient play, waves unrolling / Their shuddering paddles into the distance. [. . .] And I, a boat lost in inlets’ tangled hair, / Tossed by hurricanes into birdless air, I / Whose water-drunken carcass Coast-Guard / And Hanseatic ships could not have dredged; // Free, on fire, crowned by violet mist, / I dug a hole in a reddening sky like a wall / Smeared with solar lichen and gobs / Of azure snot, irresistible poetic treats. [. . .] Bathed in your weary waves, I can no longer ride / In the wake of cargo ships of cotton, / Nor cross the pride of flags and flames, / Nor swim beneath the killing stare of prison ships” (Arthur Rimbaud, from “The Drunken Boat” (1871), in Rimbaud Complete, trans. and ed. Wyatt Mason [New York: The Modern Library, 2002], 86-88, here’s a different translation).

To a landsman a calm is no joke. It not only revolutionizes his abdomen, but unsettles his mind; tempts him to recant his belief in the eternal fitness of things; in short, almost makes an infidel of him.

At first he is taken by surprise, never having dreamt of a state of existence where existence itself seems suspended. He shakes himself in his coat, to see whether it be empty or no. He closes his eyes, to test the reality of the glassy expanse. He fetches a deep breath, by way of experiment, and for the sake of witnessing the effect. If a reader of books, Priestly on Necessity occurs to him; and he believes in that old Sir Anthony Absolute to the very last chapter. His faith in Malte Brun, however, begins to fail; for the geography, which from boyhood he had implicitly confided in, always assured him, that though expatiating all over the globe, the sea was at least margined by land. That over against America, for example, was Asia. But it is a calm, and he grows madly skeptical.

To his alarmed fancy, parallels and meridians become emphatically what they are merely designated as being: imaginary lines drawn round the earth’s surface.

The log assures him that he is in such a place; but the log is a liar; for no place, nor any thing possessed of a local angularity, is to be lighted upon in the watery waste.

At length horrible doubts overtake him as to the captain’s competency to navigate his ship. The ignoramus must have lost his way, and drifted into the outer confines of creation, the region of everlasting lull, introductory to positive vacuity.

Thoughts of eternity thicken. He begins to feel anxious concerning his soul.

The stillness of the calm is awful. His voice beings to grow strange and portentous. He feels it in him like something swallowed too big for the esophagus. It keeps up a sort of involuntary humming in him, like a live beetle. His cranium is a dome full of reverberations. The hollows of his very bones are as whispering galleries. He is afraid to speak loud, lest he be stunned; like the man in the bass drum.

But more than all else is the consciousness of his utter helplessness. Succor or sympathy there is none. Penitence for embarking avails not. The final satisfaction of despairing may not be his with a relish. Vain the idea of idling out the calm. He may sleep if he can, or purposely delude himself into a crazy fancy, that he is merely at leisure. All this he may compass; but he may not lounge; for to lounge is to be idle; to be idle implies an absence of any thing to do; whereas there is a calm to be endured: enough to attend to, Heaven knows.

His physical organization, obviously intended for locomotion, becomes a fixture; for where the calm leaves him, there he remains. Even his undoubted vested rights, comprised in his glorious liberty of volition, becomes as naught. For of what use? He wills to go: to get away from the calm: as ashore he would avoid the plague. But he can not; and how foolish to revolve expedients. It is more hopeless than a bad marriage in a land where there is no Doctors’ Commons. He has taken the ship to wife, for better or for worse, for calm or for gale; and she is not to be shuffled off. With yards akimbo, she says unto him scornfully, as the old beldam said to the little dwarf:—“Help yourself.”

And all this, and more than this, is a calm.

I have been relatively inactive on the blog the past few months, and a number of interesting things have happened or been reported. So to celebrate the end of 2013—what I think could easily be called the Year of the National Security Agency, a year that saw perhaps a decisive shift toward the world Dave Eggers recently imagined in The Circle (2013)[1]—I have posted a number of links on recent stories involving the NSA and the national security state below. To address other stories I have neglected over the past few months, I will be posting more general links tomorrow.

A few days ago, Adam Liptak and Michael S. Schmidt reported for The New York Times that, “A federal judge [William H. Pauley III . . .] ruled that a National Security Agency program that collects enormous troves of phone records is legal, making the latest contribution to an extraordinary debate among courts and a presidential review group about how to balance security and privacy in the era of big data.” This comes only eleven days after a ruling issued on 16 December 2013 “by Judge Richard J. Leon in Washington, who ruled that the program was ‘almost Orwellian’ and probably unconstitutional.” This latter story was reported by Ellen Nakashima and Ann E. Marimow on 16 December 2013 in The Washington Post. Amy Davidson has written two fairly interesting and incisive pieces for The New Yorker analyzing each ruling: “Judge Pauley to the NSA: Go Big” and “The Domino’s Hypothetical: Judge Leon Vs. the NSA.” (The New Yorker actually has a number of articles addressing the NSA.)

In August the White House commissioned an independent report on the National Security Agency’s activities, and the report, Liberty and Security in a Changing World: Report and Recommendations of the President’s Review Group on Intelligence and Communications Technologies (the link is to the actual 304-page report), was issued on 12 December 2013. Michael Morell, one of the report’s authors, has written an opinion piece in The Washington Post, “Correcting the Record on the NSA Report.” And John Cassidy has an article in The New Yorker on the report, “Inside the White House NSA Report: The Good and the Bad.”