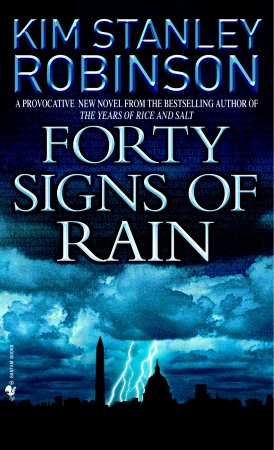 From Kim Stanley Robinson’s novel, Forty Signs of Rain (2004), from his Science in the Capital Trilogy:

The second day of the storm passed as a kind of suspended moment, everything continuing as it had the day before, everyone in the area living through it, enduring, waiting for conditions to change. The rain was not as torrential, but so much of it had fallen in the previous twenty-four hours that it was still sheeting off the land into the flooded areas and keeping them flooded. The clouds continued to crash together overhead, and the tides were still higher than normal, so that the whole Piedmont region surrounding Chesapeake Bay was inundated. Except for immediate acts of a lifesaving nature, nothing could be done except endure. All transport was drowned. The phones remained down, and power losses left hundreds of thousands without electricity. Escapes from drowning took precedence even over journalism (almost), and even though reporters from all over the world were converging on the capital to report on this most spectacular story–the capital of the hyperpower, drowned and smashed–most of them could only get as close as the edge of the storm, or the flood; inside that it was an ongoing state of emergency, and everyone involved with rescues, relocations, and escapes of various kinds. The National Guard was out, all helicopters were enlisted into the effort; the video and digital imagery generated for the world to see was still incidental to other things; that in itself meant ordinary law had been suspended, and there was pressure to bring things back to all-spectacle all-the-time. Part of the National Guard found itself posted on the roads outside the region, to keep people from flooding the area as the water had. (Kim Stanley Robinson, Forty Signs of Rain [New York: Bantam Books, 2004], 345-6.)