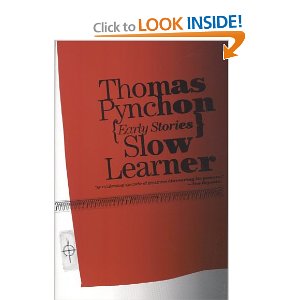 From one of the rare moments Pynchon addresses his own work:

My reading at the time also included many Victorians, allowing World War I in my imagination to assume the shape of that attractive nuisance so dear to adolescent minds, the apocalyptic showdown.

I don’t mean to make light of this. Our common nightmare The Bomb [note the capitalization] is in there too. It was bad enough in ’59 and is much worse now, as the level of danger has continued to grow. There was never anything subliminal about it, then or now. Except for that succession of the criminally insane who have enjoyed power since 1945, including the power to do something about it, most of the rest of us poor sheep [the preterite] have always been stuck with simple, standard fear. I think we all have tried to deal with this slow escalation of our helplessness and terror in the few ways open to us, from not thinking about it to going crazy from it. Somewhere on this spectrum of impotence is writing fiction about it–occasionally, as here, offset to a more colorful time and place. (Thomas Pynchon, “Introduction” in Slow Learner [New York: Little, Brown & Co., 1984], 18-19.)