Matthew Schneider-Mayerson, “On Extinction and Capitalism.”

END_OF_DOCUMENT_TOKEN_TO_BE_REPLACED

Edward J. Snowden, “The World Says No to Surveillance.”

The Guardian, “View on Surveillance after Snowden: An Outlaw Rewrites the Law.”

David Cole, “Reining in the NSA.”

Anne Richardson, “That Fine Line Between Hero and Traitor: What Can We Learn from the Snowden Disclosures?” review of After Snowden: Privacy, Secrecy and Security in the Information Age, edited by Ronald Goldfarb.

Bryan Magers, “The War in Africa the US Military Won’t Admit It’s Fighting.”

END_OF_DOCUMENT_TOKEN_TO_BE_REPLACED

Another semester is coming to a close, and I finally have a chance to sit down and sort through the backlog of links that have been piling up over the past few months. So, with no further ado, links.

Thomas Erdbrink, “Iran’s Leaders Fall Into Line Behind Nuclear Accord.”

“South Africa Rebuffs US Attempts to Take Over Its Nuclear Material.”

Jon Greenberg, “The Odd Reality of Iran’s Centrifuges: Enough for a Bomb, Not Power.”

END_OF_DOCUMENT_TOKEN_TO_BE_REPLACED

Surveillance, consent, networks, numbers, the hyperarchival condition of the contemporary: Natasha Lennard writes “Of Being Numerous” for The New Inquiry.

This doesn’t seem like reading at all: the new “speed reading app.”

Rebecca Stoner in The Daily Sophist: “What’s Love Got to Do with Anything? DFW Biographer D.T. Max Speaks on Campus.”

“A Game is Being Beaten” by Leigh Alexander at The New Inquiry: “The trend in video game design is to comment on violence by asking players to perform violence. But could there be pleasure in performing consent?”

“How Benjamin Kunkel Went from Novelist to Marxist Public Intellectual” by David Wallace-Wells at Vulture.

My good friend Ryan Pierson on The Lego Movie: “On the Nonessential Beauty of Legos.”

And because I saw it yesterday and enjoyed it (though I am a bit confounded by this fact), another: Andrew O’hehir for Salon: “The Lego Movie: Plastic Blocks Fight for Freedom!”

German philosophers play Monopoly. (I wonder what would happen if they got a game of Risk [The Game of Ruining Friendships] going.)

And sad news in hyperarchival realism. Google is redoing its Street View for many places in Pittsburgh, and thus Ben Kinsley and Robin Hewlett’s wonderful Street With a View is going away. (Right now it goes from a marching band in the rain to a deserted, sunny street. Uncanny.) Ah, the transitory internet–perhaps it isn’t an archive at all, for really, how do we archive the present in the present. . . .

A short film on Street With a View:

Things are happening very quickly in the Ukraine. David Remnick reports on the most recent events for The New Yorker in “Putin Goes to War.” He writes:

Vladimir Putin, the Russian President and autocrat, had a plan for the winter of 2014: to reassert his country’s power a generation after the collapse of the Soviet Union. He thought that he would achieve this by building an Olympic wonderland on the Black Sea for fifty-one billion dollars and putting on a dazzling television show. It turns out that he will finish the season in a more ruthless fashion, by invading a peninsula on the Black Sea and putting on quite a different show—a demonstration war that could splinter a sovereign country and turn very bloody, very quickly.

In other news, Luke O’Neil has a piece in Esquire: “The Year We Broke the Internet: An Explanation, an Apology, a Plea.”

From my old neck of the woods, “Say Goodbye to Phoenix–And the American West.”

And a blast from the past. A video for The Faint‘s new single, “Help in the Head,” from their forthcoming album Doom Abuse. I cannot help but see this video as a paranoid reflection on the total surveillance of contemporaneity.

Christine Jun for Dazed Digital has posted an  A-Z list of some incredible contemporary art that engages with technologies of surveillance in “The dA-Zed Guide to Surveillance: Drones in the Sky, Whistleblowers in Jail: How Art is Responding to Big Brother’s Watch.” Of especial note is Robin Hewlett and Ben Kinsley‘s Street with a View, which was done a number of years ago while both were pursuing Master’s of Fine Arts degrees at Carnegie Mellon University, just down the street from me. I have met Ben a few times and had the opportunity to talk with him about this project while he was working on it. A pic (and a link to the Street with a View at Google maps): 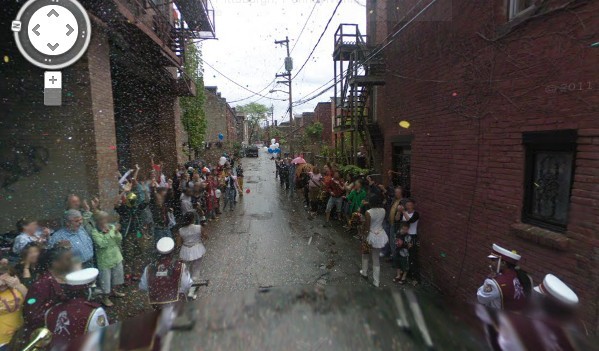 I especially appreciate Hewlett and Kinsely’s hyperarchivally realist work here for integrating the archival processes of contemporaneity, the all-surveilling  eye of Google and their maps, the social and local residents of the area, and what in the end is pretty high-concept performance art. Simply wonderful. (And that they somehow got Google to come out and take part, all the better. I also probably should have posted something about Street with a View years ago, but I’m glad being pointed toward Dazed Digital‘s A-Z list reminded me of how excellent this happening was.)

A bunch of interesting stories today:

The Faces of Project Y: the security badges for those working on the Manhattan Project.

And in further news from the Orwellian security state: “Apple has patented a piece of technology which would allow government and police to block transmission of information, including video and photographs, from any public gathering or venue they deem ‘sensitive,’ and ‘protected from externalities.'”

The Atlantic has amazing time-lapse satellite images showing the massive changes to the human-built world. An archive of disaster.

And from The Chronicle of Higher Education: “The National Institutes of Health announced on Wednesday that it had reached an agreement to give the family of Henrietta Lacks, an African-American woman who died of cervical cancer in 1951, some control over researchers’ access to the genomic data of cells derived from her tumor, according to The Wall Street Journal.”

In a recently published essay, I have defined the term “hyperarchive” as “an archive whose goal, whether stated or not, can be seen in an attempt to gather together as many documents and texts as it can, regardless of content.”[1] This term clearly applies to the recent revelations about the National Security Agency’s (NSA) data collection. In fact, Prism may well be the best example of a hyperarchive to date (besides the Web). To not at least gesture toward talking about Prism and massive data collection on this blog would constitute gross negligence.

One of the things that this blog consistently tries to demonstrate, draw attention to, and complicate/challenge, is the relationship between technologies of destruction and accumulation, even if only by noting (and sometimes enacting) such relationships with little-to-no commentary. I have refrained from saying much about the recent and developing story about Prism and the NSA,[2] both because it seems too “obvious” and too complex. Prism is an accumulatory technology with clear dangers and evils (which I do not think I have to spell out). Some of these dangers and evils are quite old now, and quite familiar.[3] Others are just emerging, and the potential for misusing the kind of data collected by Prism appears to be limitless. Given the parameters of the hyperarchival impulse of contemporaneity, and the reality of ubiquitous access to massive amounts of information, it is not even vaguely surprising that the NSA has been amassing massive amounts of data. And obviously there is quite a bit wrong with this (part of which is the fact that Edward J. Snowden’s revelation is not surprising).

Glen Greenwald, the writer for TheGuardian who broke this story and has been consistently reporting on it, asked nearly a month ago, “Are All Telephone Calls Recorded and Accessible to the US Government?” Most of us have probably been asking this question for a number of years. The fact that we have been asking this question seriously, for a sustained amount of time,[4] only reinforces the realities of contemporary informatics: that many of us have always tacitly assumed that we were being watched, recorded, etc., pretty much all the time. The fact that we are not much, much more upset about this scandal is probably due to this reality of contemporaneity. Thus Snowden’s whistleblowing is functioning as a confirmation of what everyone always already knew: the emperor is naked, we know, are not pretending otherwise, and don’t seem to mind. This is disturbing, to say the least.[5]

Basically, the issues being raised by the NSA scandal, the implications for thinking about information, surveillance, discipline, and control, issues regarding archives and literature, technology and war, media and communication, contemporaneity and the risk society, immigration, the nation, and the state, are many. I will not dwell on them here, in hopes that thinking about these issues will take the form of an essay (hopefully destined for a more permanent home in a [slightly] different kind of archive). In lieu of more sustained reflection and further remarks, here is a pretty decent smattering of links related to the issue in (more-or-less) chronological order. I imagine I will continue to post links regarding Prism well into the future.