Ian Johnston, “Climate Change May Be Escalating So Fast It Could Be ‘Game Over,’ Scientists Warn.”

Noam Chomsky, “The Republican Party Has Become the Most Dangerous Organization in World History.”

Douglas Fox, “Scientists Are Watching in Horror as Ice Collapses.”

END_OF_DOCUMENT_TOKEN_TO_BE_REPLACED

As predicted, I have been quite busy indeed and have not had a chance to post anything over the past couple of weeks. A bunch of fascinating stuff has been happening, a bunch of interesting books are coming out, etc., so I’m sad that I’ve been remiss in my duties. Hopefully this large batch of links will make up for that.

George Dvorsky, “Have Humans Already Conquered the Threat of Extinction?”

One of the first reviews of Naomi Klein’s new book, This Changes Everything: Capitalism vs. the Climate.

And who knows where to put this one: Alison Flood, “Margaret Atwood’s New Work Will Remain Unseen for a Century.”

END_OF_DOCUMENT_TOKEN_TO_BE_REPLACED

David Foster Wallace and “The Long Thing”: New Essays on the Novels, edited by Marshall Boswell, to which I have contributed an essay, “‘Then Out of the Rubble’: David Foster Wallace’s Early Fiction,” is set to appear 31 July 2014. This volume collects revised versions of essays from two special issues of Studies in the Novel from 2012 (44.3 and 44.4). I am delighted to be included in this excellent collection. See the blurbs at Bloomsbury’s site and read the first review from Publisher’s Weekly. It is reasonably priced right now, and Amazon has it listed in stock (before its release date . . .). Here is a description of the book:

Of the twelve books David Foster Wallace published both during his lifetime and posthumously, only three were novels. Nevertheless, Wallace always thought of himself primarily as a novelist. From his college years at Amherst, when he wrote his first novel as part of a creative honors thesis, to his final days, Wallace was buried in a novel project, which he often referred to as “the Long Thing.” Meanwhile, the short stories and journalistic assignments he worked on during those years he characterized as “playing hooky from a certain Larger Thing.” Wallace was also a specific kind of novelist, devoted to producing a specific kind of novel, namely the omnivorous, culture-consuming “encyclopedic” novel, as described in 1976 by Edward Mendelson in a ground-breaking essay on Thomas Pynchon’s Gravity’s Rainbow.

David Foster Wallace and “The Long Thing” is a state-of-the art guide through Wallace’s three major works, including the generation-defining Infinite Jest. These essays provide fresh new readings of each of Wallace’s novels as well as thematic essays that trace out patterns and connections across the three works. Most importantly, the collection includes six chapters on Wallace’s unfinished novel, The Pale King, which will prove to be foundational for future scholars of this important text.

Part I: Wallace as Novelist

Adam Kelly, “David Foster Wallace and the Novel of Ideas.”

Allard den Dulk, “Boredom, Irony, and Anxiety: Wallace and the Kierkegaardian View of the Self.”

Andrew Warren, “Modeling Community and Narrative in Infinite Jest and The Pale King.”

Bradley J. Fest, “‘Then Out of the Rubble’: David Foster Wallace’s Early Fiction.”

Stephen J. Burn, “‘A Paradigm for the Life of Consciousness’: The Pale King.”

Conley Wouters, “‘What Am I, a Machine?’: Humans and Information in The Pale King.”

Ralph Clare, “The Politics of Boredom and the Boredom of Politics in The Pale King.”

The New York Times on the collapse of the West Antarctic Ice Sheet.

Paul Krugman, “Points of No Return.”

Gerry Canavan on “Dystopia, Anti-Utopia, and the End of the World.”

Peter Frase, “Adjusting to the Apocalypse.”

A very interesting piece at Jacobin reflecting on an analogy between abolitionists and environmentalists: Matt Karp, “A Second Civil War.”

Roger Peet, “A Radical Approach to the Climate Crisis.”

And “Picture This: U.S. Cities Under 12 Feet of Sea Level Rise.” An example:

But don’t fret, “This Couple is Making Roads Out of Solar Panels, and They Actually Work.”

And Michelle Nijhuis, “How to Laugh at Climate Change.”

END_OF_DOCUMENT_TOKEN_TO_BE_REPLACED

The Chronicle of Higher Education has a discussion of Elaine Scarry‘s new book, Thermonuclear Monarchy: Choosing Between Democracy and Doom (2014). Nathan Schneider has written an extensive review of Thermonuclear Monarchy, “A Literary Scholar’s Voice in the Wilderness: Elaine Scarry Fights American Complacency About Nuclear Arms.” Scarry is also the author of the monumentally important, The Body in Pain: The Making and Unmaking of the World (1987).

“Melting Ice Makes the Arctic A Much Worse Heat-Magnet than Scientists Feared.”

January was actually one of the warmest months on record.

And more disastrous weather to come.

Davis and Michaels explaining why they’re striking at The Chronicle of Higher Education.

On Dead Poets Society (1989) and the humanities.

I just received in the mail today the first volume of the two-part special issue Studies of the Novel is devoting to the novels of David Foster Wallace, edited by Marshall Boswell, in which my essay, “‘Then Out of the Rubble’: The Apocalypse in David Foster Wallace’s Early Fiction,” appears. Check it out (esp. if you have Project Muse access). There are some excellent other essays from Allard den Dulk, David Letzler, Adam Kelly, and Philip Sayers as well. 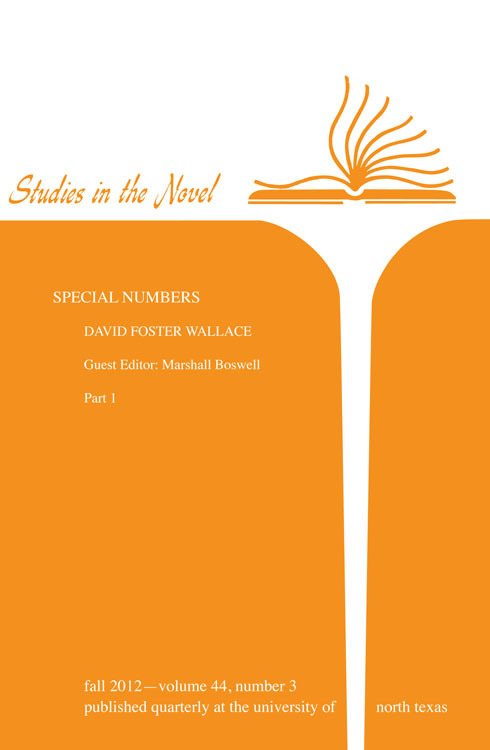 A new journal on Thomas Pynchon, Orbit: Writing Around Pynchon, just released its second issue, and it contains some interesting essays, and also includes David Letzler’s review of Theophilus Savvas’s Postmodernist Fiction and the Past.